As an Arizona Industrial Photographer, I have visited the bottom of the earth like Westinghouse nuclear storage facilities south of Carlsbad New Mexico. Driving 60 miles an hour in a truck 3000 feet underground or photographing for Magma Copper 3000 feet bellow the surface of the earth or hanging out in open pit mines for companies like Phelps Dodge. I have also hung out with molten copper, for Magma, Phelps dodge.

Considered one of the top Phoenix Industrial Photographers I have been inside just about every clean room in Arizona from Intel, to Honeywell, to Motorola.

I have also been heavily involved in Aviation Photography, photographing commercial airlines, annual reports from Southwest Airlines, to America West Airlines. I have photographed for Evergreen Aviation, Intertec Corporation, to private parties that own Lear jets, to piper cubs, to Cessna’s to Apaches helicopters, to US Governments F-15’s for stories on the Air Force. Then when I am on the ground you could find me at Frito Lays in Casa Grande Arizona, to Poor Bothers Potato Chip in Phoenix Arizona, to CC Pollen Honey.

As a premier Phoenix Industrial Photographer I have also had the privlidge to worked for many agricultural related stories for many national publications. During my industrial photography career I have worked on many stories that have dealt with power companies like APS, or stories on Palo Verde Nuclear facility. In the automotive industry I have been involved with companies that manufacture airbags and electric car technology. 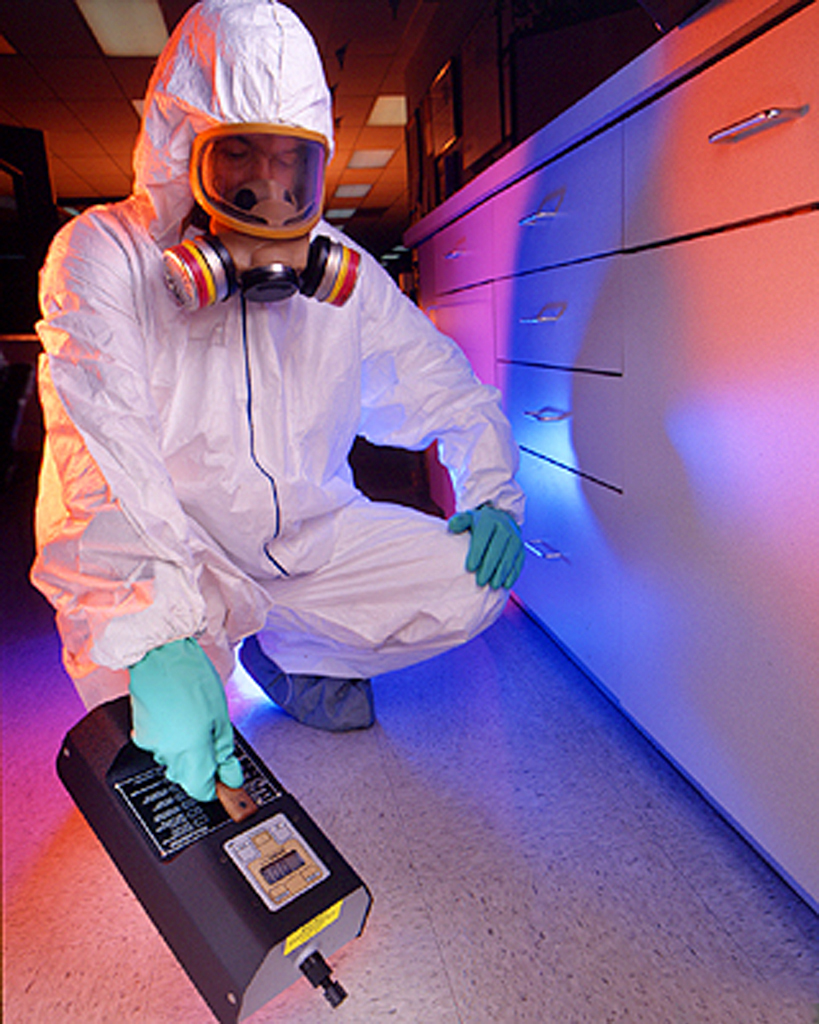 This company was located in Phoenix Arizona next to Skye Harbor Airport. The company made instruments that detected toxic material in industrial areas. As a corporate industrial photographer it is my job to use creative lighting to make the product look dramatic. I used my Reeds Lighting tool color gels to create the mood. 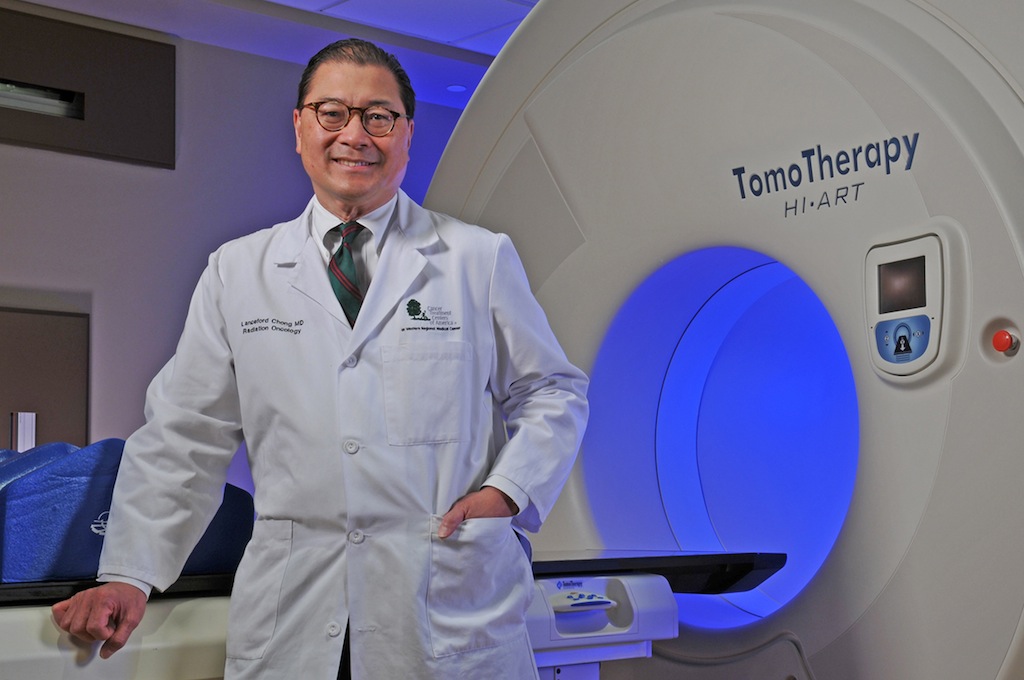 This corporate portrait happen this last year. CTCA was updating their websites and I spent several days photographing these types of corporate photography portraits at their Goodyear Arizona location. This type of corporate location photography I could do blindfolded. My first client like this was Scottsdale Health Care System which I photographed there annual reports for a good Ten Years. Every time I work out at Cancer Treatment Centers of America I kiss the ground for my good health. Its true when you have your health you have everything! We had less than 30 minutes to make this photograph happen, from start to finish. 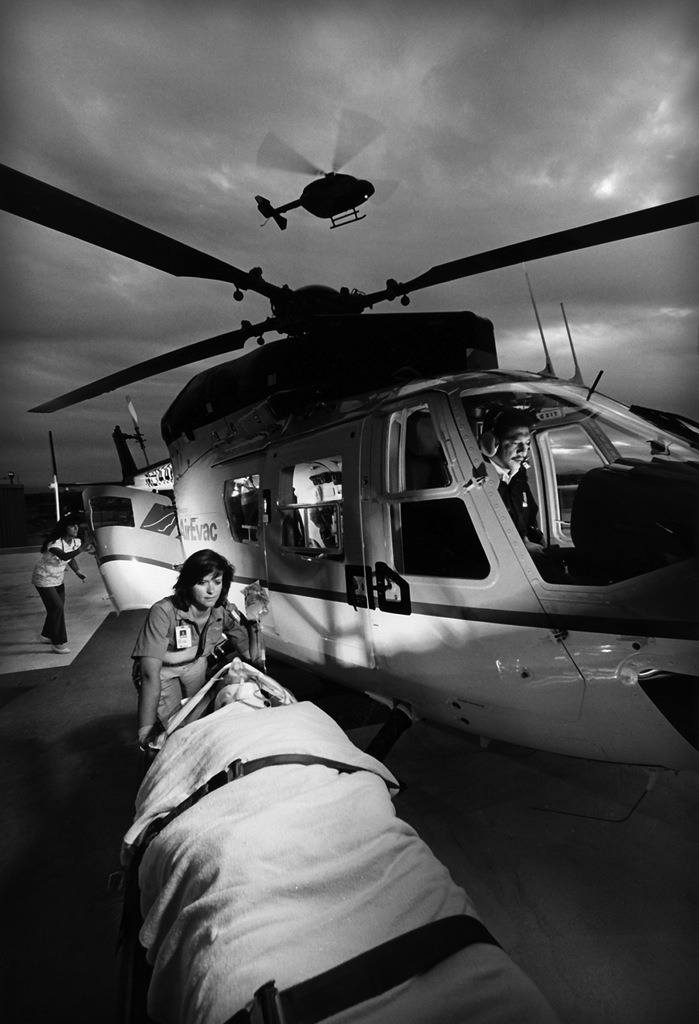 This image was taken for an annual report for Banner health Systems when they were Samaritan Hospital. This action corporate photography was photographed at their Phoenix Hospital location on top of their heli Pad. The helicopter above woke up the whole hospital. The helicopter in the air is pretty close. I have had the opportunity to photograph many hospitals and hospital helicopters in my carrier. In fact I am very comfortable photographing with all kinds of Helicopter Photography. One of my dreams is to become a helicopter pilot. The first time I sat in the front of a helicopter next to a pilot it blew my mind. I thought I was in Star Track. The first time I was ever in a helicopter I did areal photography with the back door off, and my assistant held on to my belt as I leaned out of the helicopter to get the view I needed.

Taser International Owner Rick Smith
This editorial portrait is also a good example of industrial photography or corporate photography. The photographic assignment was for Der Spiegel out of Germany from the affiliate office in New York City. The company makes electroshock guns. The portrait happen at their corporate Scottsdale Arizona Office, which is also were they manufacture the guns. The image was photographed available light. With the high ISO on digital cameras you can take a lot of photographs that look good when film wouldn’t be able to handle the same quality especially in color. Over the last 29 years I have been in some of most load, terrible environmental air and other toxic environments one could imagine. The worst was the smelter of a copper mine for Magma Copper in southern Arizona, and Phelps Dodge in Southern New Mexico. 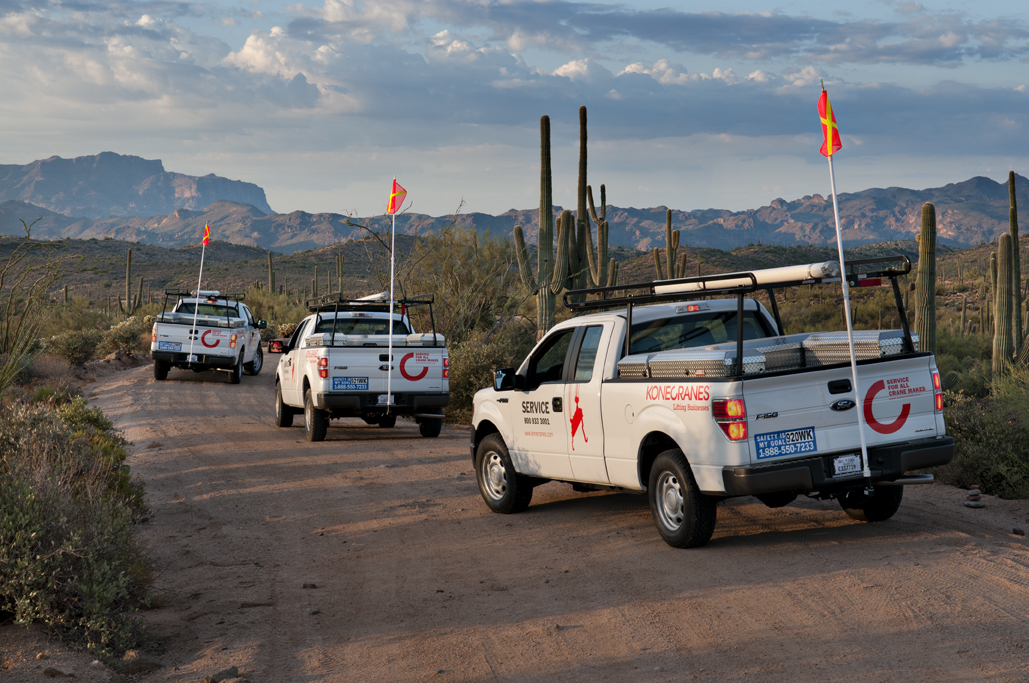 This was for an Annual Report. As an Arizona Annual Report Photographer this was a little different assignment then usual. I was asked to photograph three trucks out in a desert location close to Phoenix Arizona. Kone Cranes is out of Norway, and repairs and installs lifts & elevators for the mining industry. In car photography it is all about location, perspective, and lighting. After living in Arizona for 30 years, I have seen most locations in Arizona. 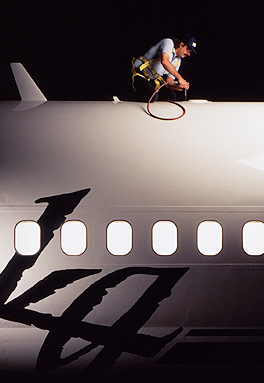 This was for a corporate brochure, and collateral.
This industrial photography was taken in Goodyear Arizona for a company that repairs commercial airliners called Intertec. When photographing airplane photography one has to work very fast. It is extremely expensive for planes to be sitting. 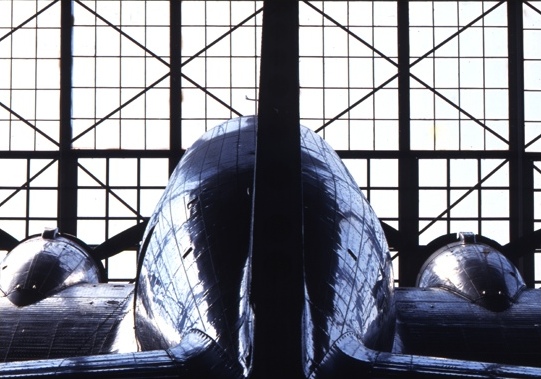 This photograph was for an assignment for Newsweek Magazine. The story was on United Airlines. This DC3 was one of the first DC3 planes ever made. As an Arizona Editorial Photographer this was a great job. When I walk into the hanger the light blew me away. This image was photographed at a graveyard for Planes called Evergreen Aviation. 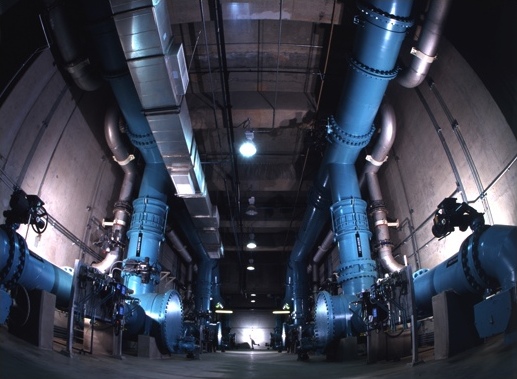 This industrial photography image was taken for the City of Scottsdale Waste Treatment Annual Report. We spent a couple days photographing this amazing facility. These photographs ended up winning corporate awards. This industrial photograph was taken as an Arizona Editorial Photographer. The image was taken for Fortune Magazine. In San Manuel Arizona in Pima County. Copper molds were being formed in the trays that they poured the hot molten cooper. The mining company at the time was Magma Copper.